It is a hobby of mine as I read to take some of my favorite quotes and create some fun corresponding graphics to share with others. I hesitate to call it graphic design since I hardly know what I am doing! Every Friday I share some of these quotes and graphics with you. Feel free to share or use of any of them. I wouldn’t mind the shout out if you do.

This week’s quotes are designed to help you celebrate Dr. Martin Luther King Jr. Day on January 21st. Each of these quotes were pulled from his sermons as they are recorded in the book Strength To Love.

Honesty also impels us to admit that the church has not been true to its social mission on the question of racial justice. In this area it has failed Christ miserably. This failure is due not only to the fact that the church has been appallingly silent and disastrously indifferent to the realm of race relations but even more to the fact that it has often been an active participant in shaping and cystallizing the patterns of the race-caste system. Colonialism could not have been perpetuated if the Christian church had really taken a stand against it. One of the chief defenders of the vicious system of apartheid in South Africe today is the Dutch Reformed Protestant Church. In America slavery could not have existed for almost two hundred and fifty years if the church had not sanctioned it, nor could segregation and discrimination exist today if the Christian Church were not a silent and often vocal partner. We must face the shameful fact that the church is the most segregated major insitution in American society, and the most segregated hour of the week is, as Professor Liston Pope has pointed out, eleven o’clock on Sunday morning. How often the church has been an echo rather than a voice, a taillight behind the Supreme Court and other secular agencies, rather than a headlight guiding men progressively and decisively to higher levels of understanding.

The judgment of God is upon the church. The church has a schism in its own sould that it must close. It will be one of the tragedies of Christian history if future historians record that at the height of the twentieth century the church was one of the greatest bulwarks of white supremacy. 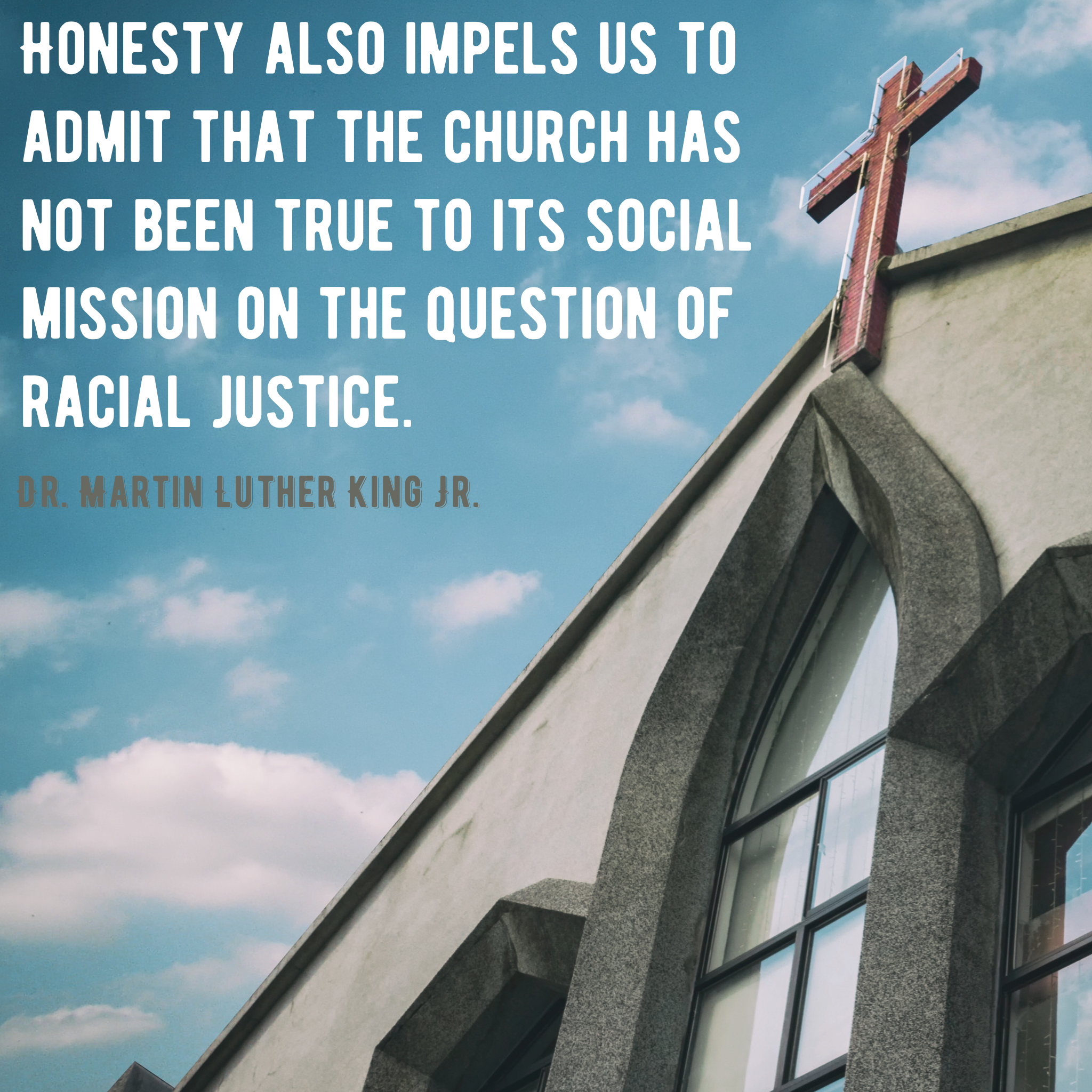 Desegregation will break down the legal barriers and bring men together physically, but something must touch the hearts and souls of men so that they will come together spiritually because it is natural and right. A vigorous enforcement of civil rights laws will bring an end to segregated public facilities that are barriers to a truly desegregated society, but it cannot bring an end to fears, prejudce, pride, and irrationality, which are the barriers to a truly integrated society. 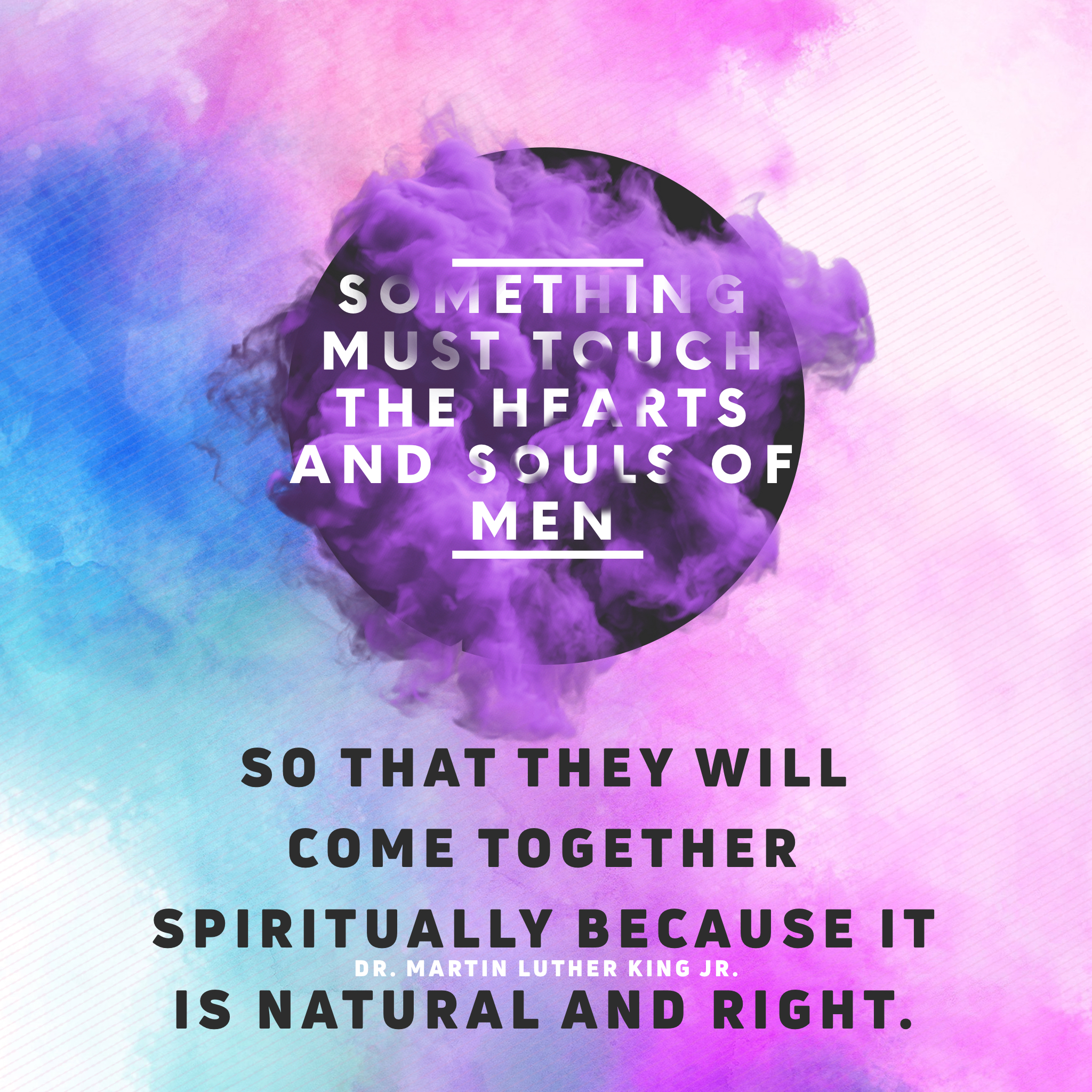 The true neighbor will risk his position, his prestige, and even his life for the welfare of others. In dangerous valleys and hazardous pathways, he will lift some bruised and beaten brother to a higher and more noble life. 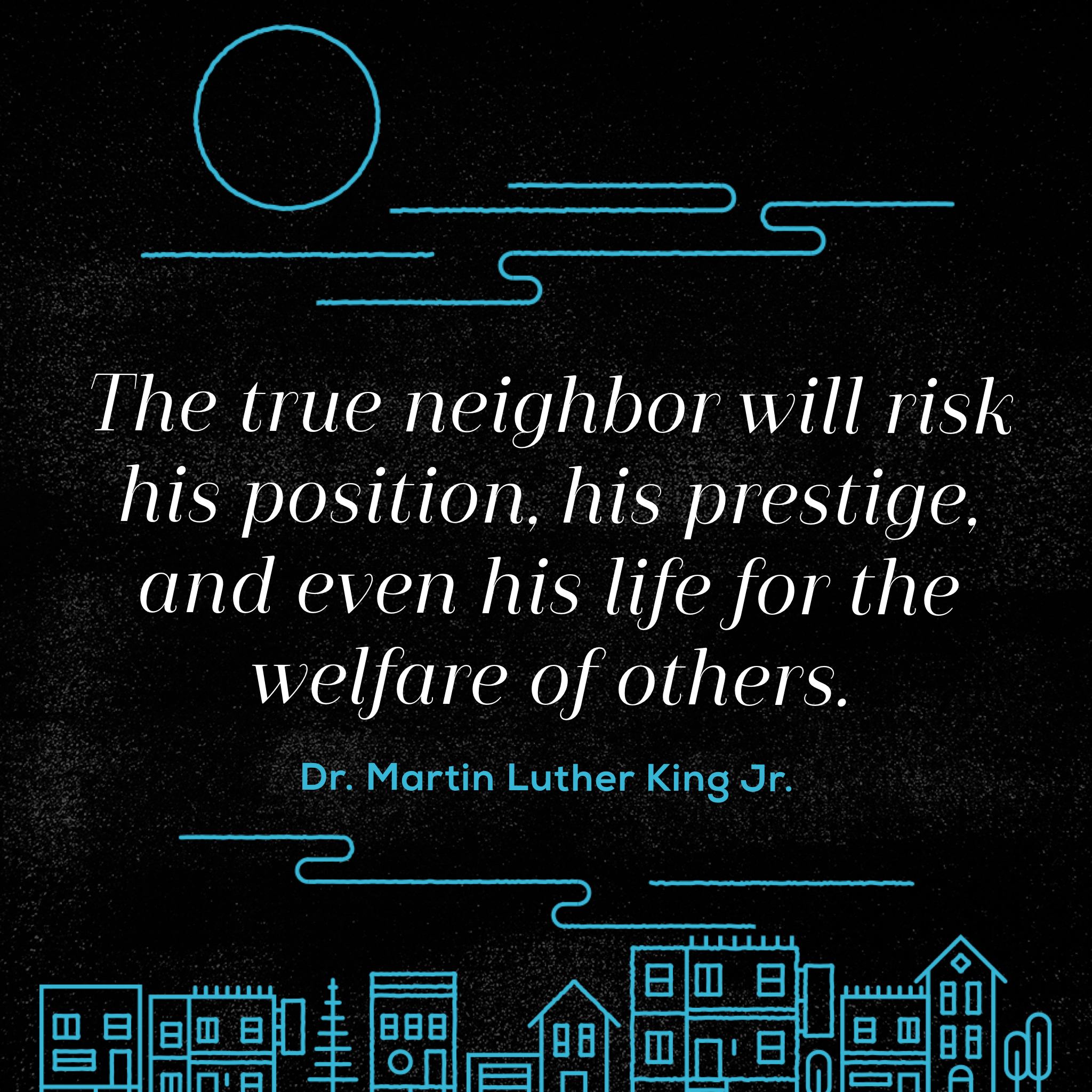 There may be a conflict between soft-minded religionists and tough-minded scientists, but not between science and religion. Their respective worlds are different and their methods are dissimilar. Science investigates; religion interprets. Science gives man knowledge that is power; religion gives man wisdom that is control. Science deals mainly with facts; religion deals mainly with values. The two are not rivals. They are complementary. Science keeps religion from sinking into the vally of crippling irrationalism and paralyzing obscurantism. Religion prevents science from falling into the marsh of obsolete materialism and moral nihilism. 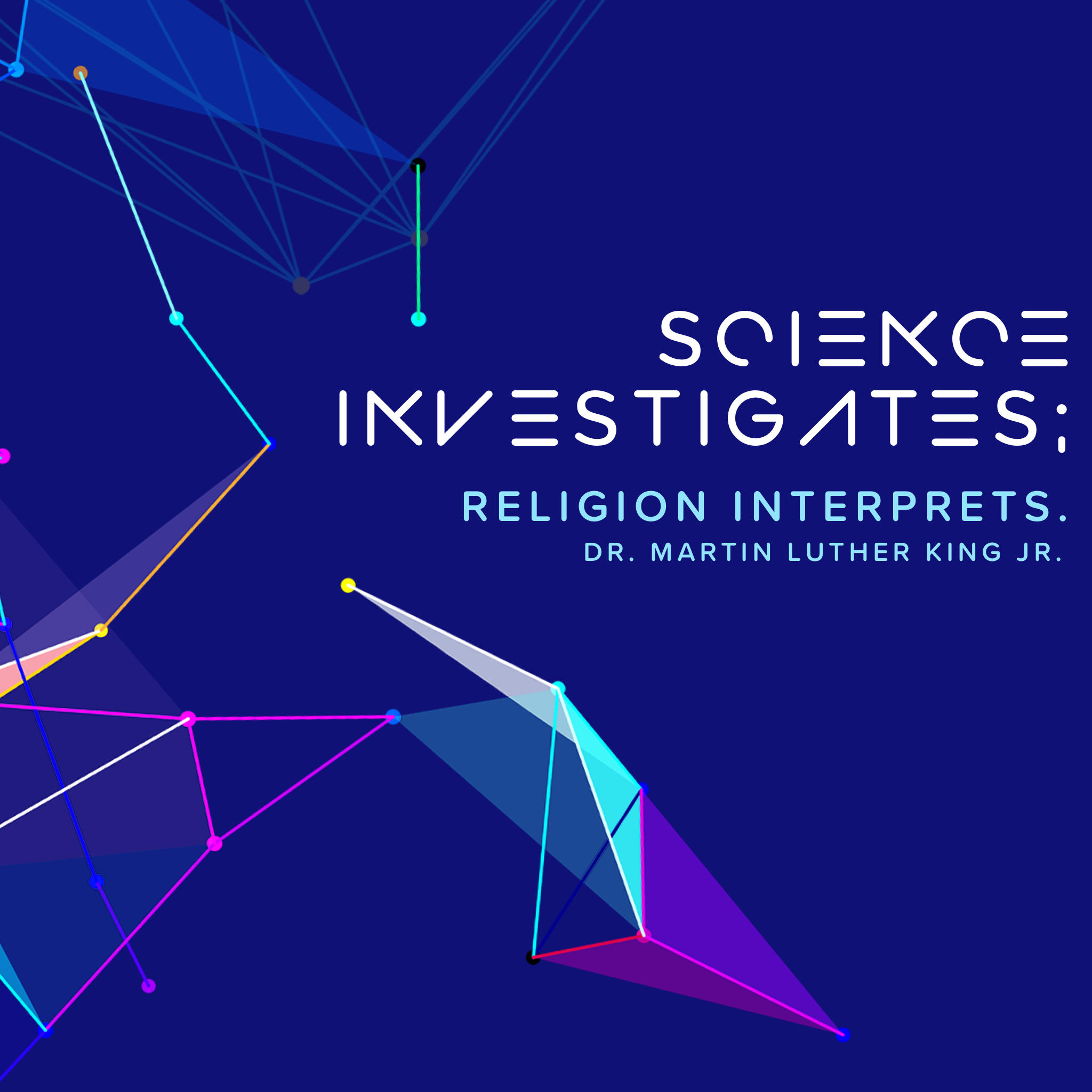 How often are our lives characterized by a high blood pressure of creeds and an anemia of deeds! We talk eloquently about our commitment to the principles of Christianity, and yet our lives are saturated with the practices of paganism. 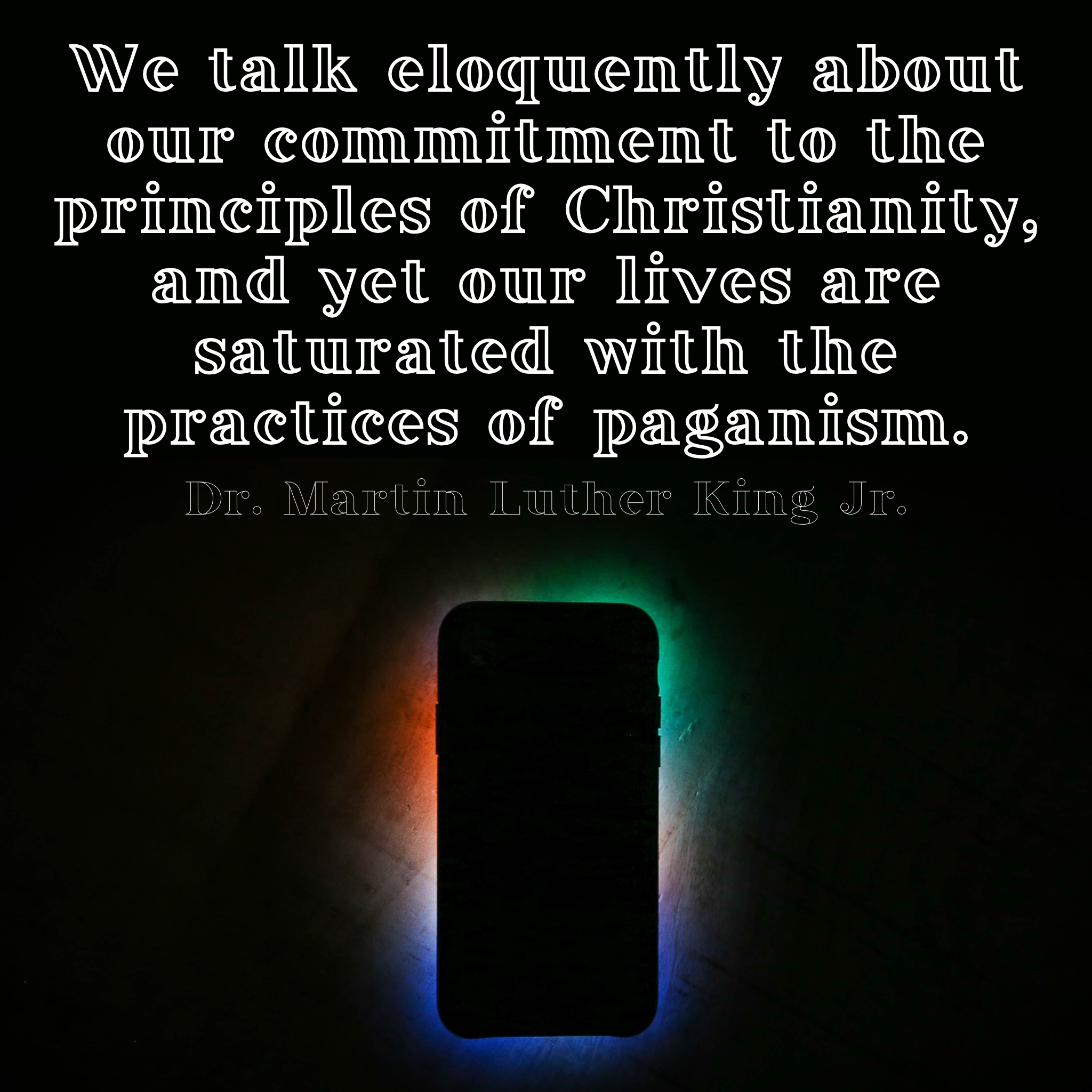 Let me apply what I have been saying to our personal lives. Many of you know what it means to struggle with sin. Year by year you were aware that a terrible sin – slavery to drink, perhaps, or untruthfulness, impurity, selfishness – was taking possession of your life. As the years unfolded and the vice widened its landmarks on your soul, you knew that it was an unnatural intruder. You may have thought, ‘One day I shall drive this evil out. I know it is destroying my character and embarrassing my family.’ At last you determined to purge yourself of the evil by making a New Year’s resolution. Do you remember your surprise and disappointment when you discovered, three hundred and sixty-five days later, that your most sincere efforts had not banished the old habit from your life? In complete amazement you asked, ‘Why could I not cast it out?’

In despair you decided to take your problem to God, but instead of asking him to work through you, you said, ‘God, you must solve this problem for me. I can’t do anything about it.’ But days and months later the evil was still with you. God would not cast it out, for he never removed sin without the cordial cooperation of the sinner. No problem is solved when we idly wait for God to undertake full responsibility.

One cannot remove and evil habit by mere resolution nor by simply calling on God to do the job but only as he surrenders himself and becomes an instrument of God. 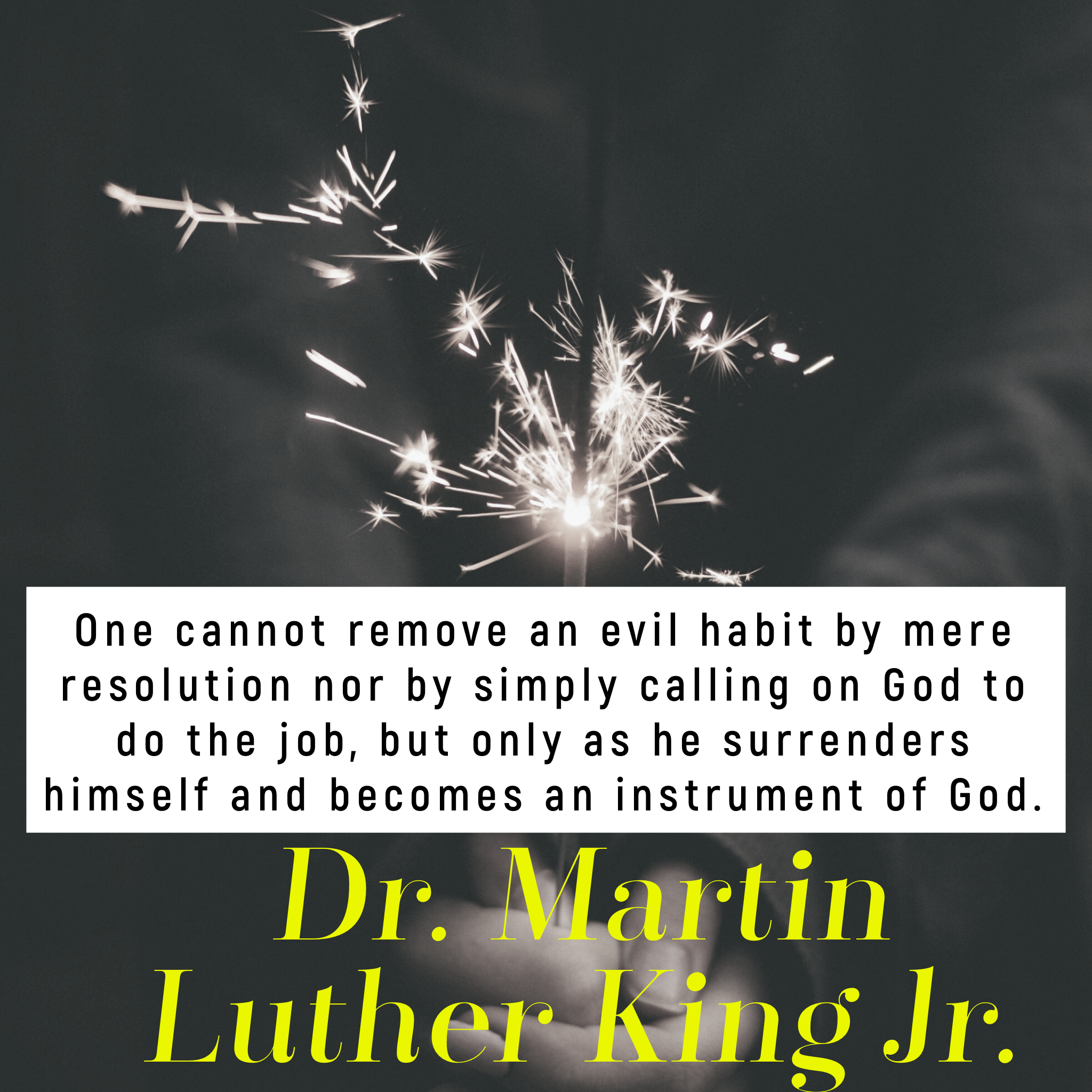 Someone formulated the argument of the inferiority of the Negro according to the framework of an Aristotelian syllogism:

All men are made in the image of God;
God, as everyone knows, is not a Negro;
Therefore, the Negro is not a man. 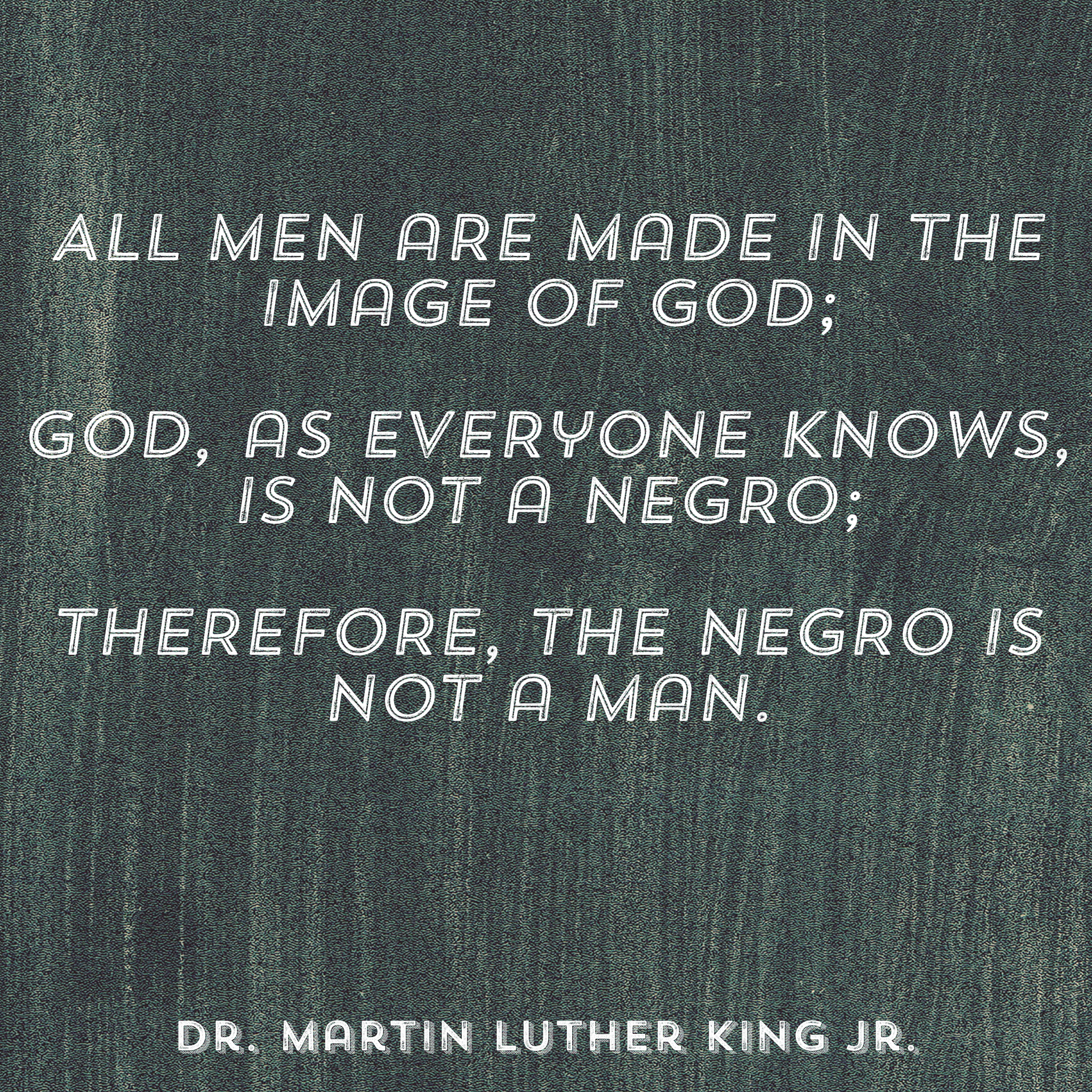 I would not conclude without applying the meaning of the text to the nature of God. The greatness of our God lies in the fact that he is both tough minded and tenderhearted. He has qualities both of austerity and gentleness. The Bible, always clear in stressing both attributes of God, expresses his tough mindedness in his justice and wrath and his tenderheartedness in his love and grace. God has two outstretched arms. One is strong enough to surround us with justice, and one is gentle enough to embrace us with grace. On the one hand, God is a God of justice who punished Israel for her wayward deed, and on the other hand, he is a forgiving father whose heart was filled with unutterable joy when the prodigal son returned home.

I am thankful that we worship a God who is both tough minded and tenderhearted….God is neither hardhearted nor soft minded. He is tough minded enough to transcend the world; he is tenderhearted enough to live in it. He does not leave us alone in our agonies and struggles. He seeks us in dark places and suffers with us and for us in our tragic prodigality. 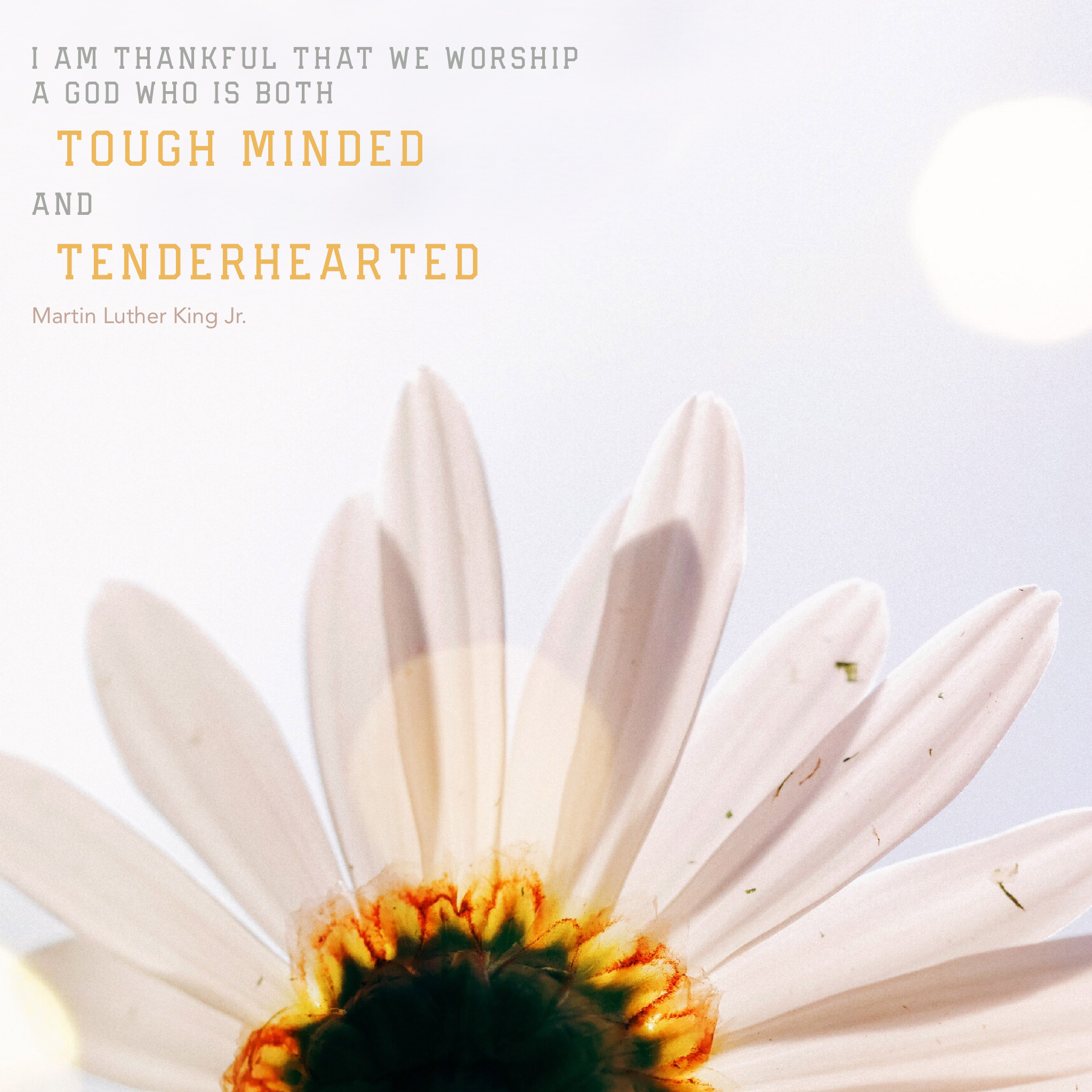 Everybody wishes to love and to be loved. He who feels that he is not loved feels that he does not count. Much has happened in the modern world to make men feel that they do not belong. Living in a world that has become oppressively impersonal, many of us have come to feel that we are little more than numbers. 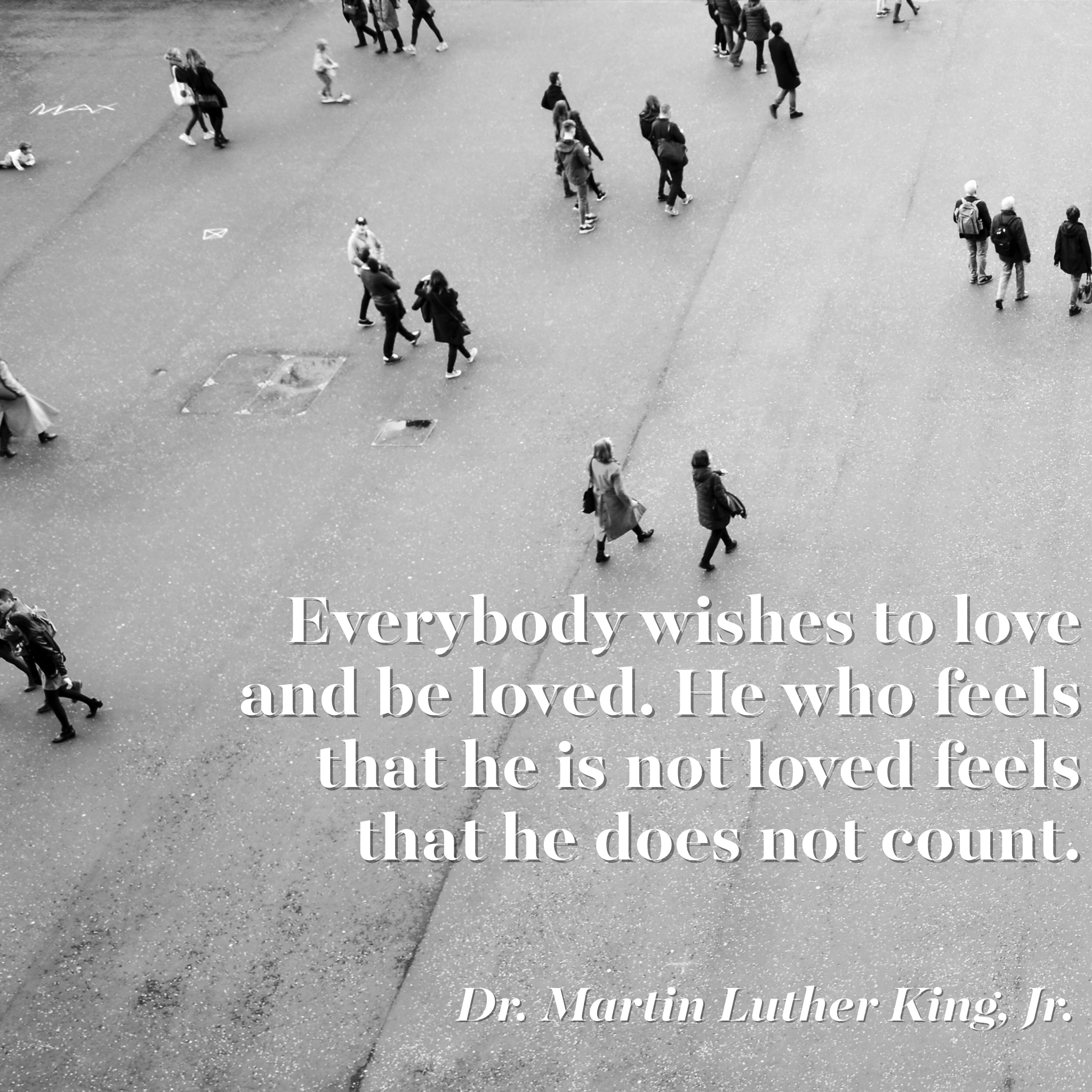 Rarely do we find men who willingly engage in hard, solid thinking. There is an almost universal quest for easy answers and half-baked solutions. Nothing pains some people more than having to think. 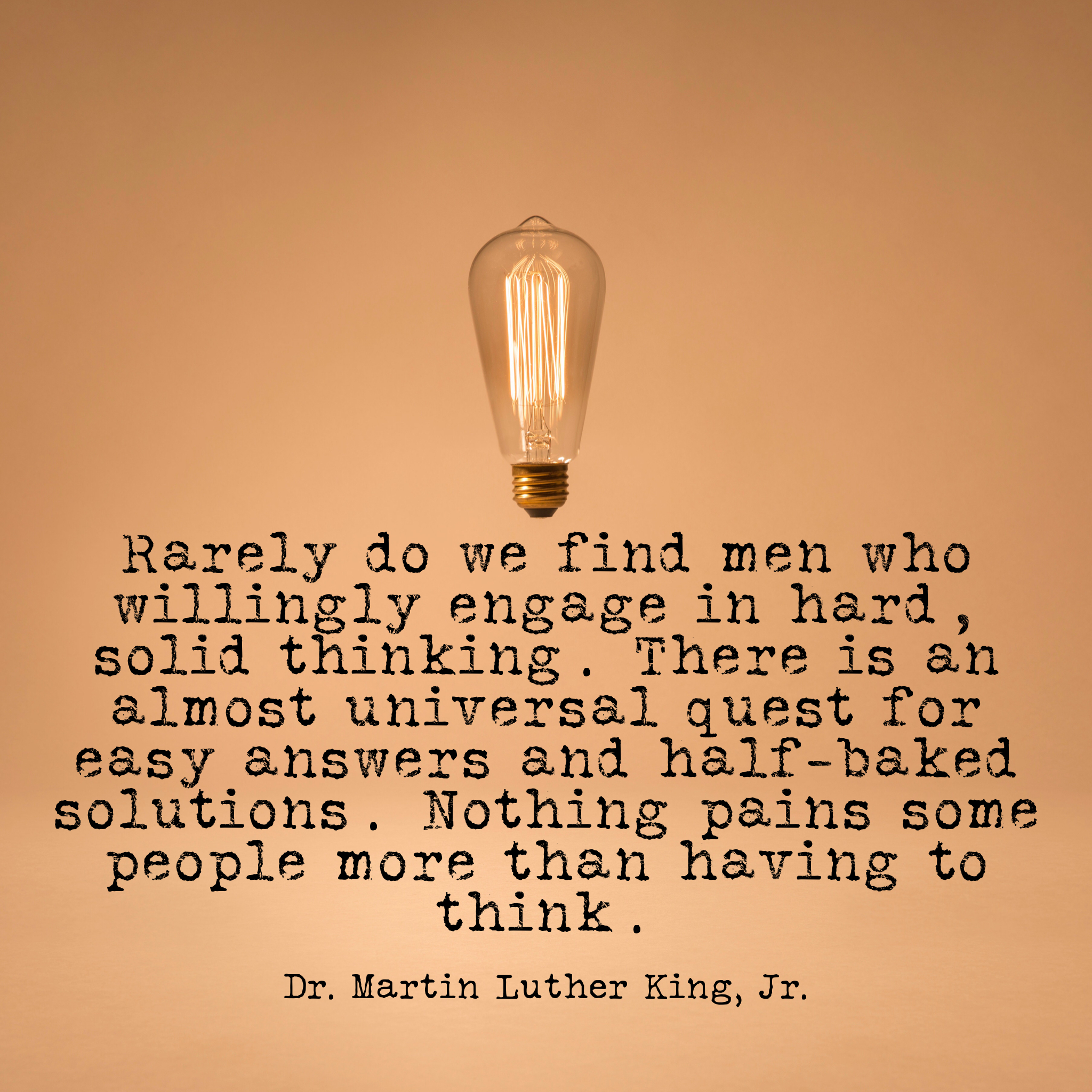 We have learned to fly the air like birds and swim the sea like fish, but we have not learned the simple art of living together as brothers. Our abundance has brought us neither peace of mind nor serenity of spirit. 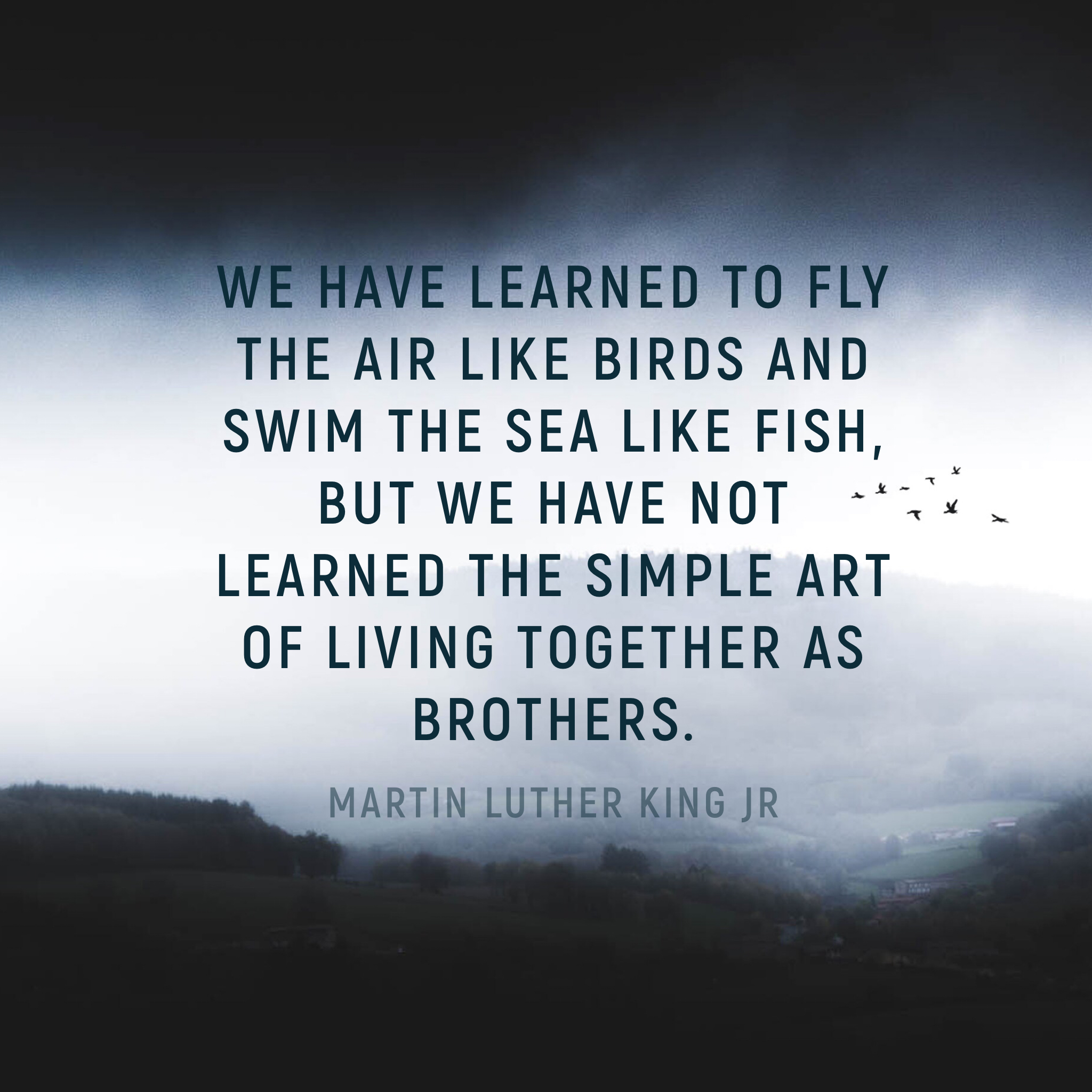 Religion at its best realizes that the soul is crushed as long as the body is tortured with hunger pangs and harrowed with the need for shelter. 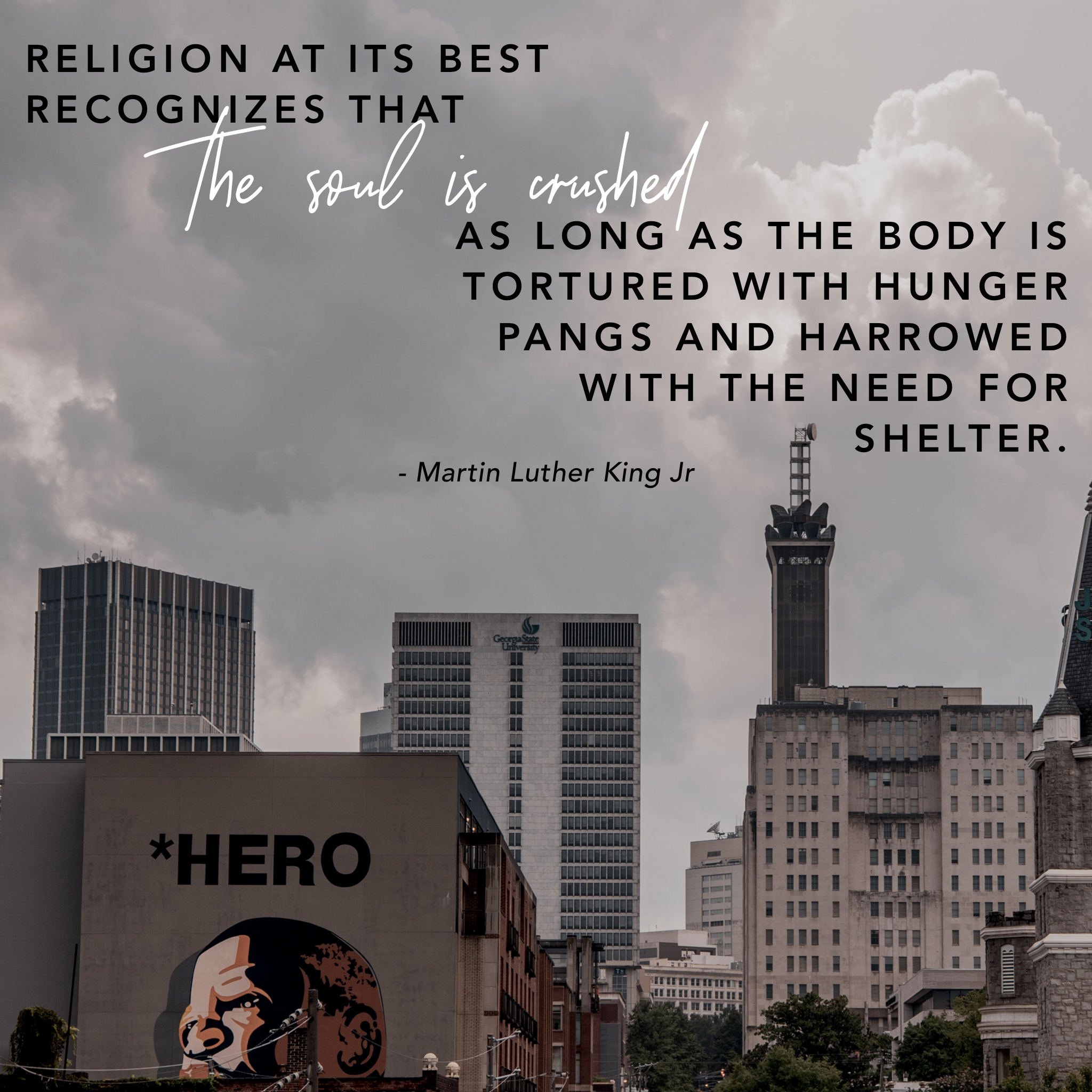