I have very spirited memories of the neighborhood I grew up in as a child; memories of running through the neighborhood with friends, going in and out of our houses and playing in our yards. Our neighborhood was an open one and as children we had the ability to run freely where ever we desired. We had access to each other’s homes and toys were freely shared. If I try hard enough, I can nearly remember what every yard, house and family looked like. This was the culture of our neighborhood: open and inviting, willing to share what we had with each other.

Next door to my house was a big plot of land that for many years sat empty. This was a shared space where all of us could play and be as crazy as we wanted.

That is…until everything changed.

A new family moved into the neighborhood and built a house on that plot of land. They had recently won a large amount of money in a lawsuit – so this wasn’t just any house. It was nearly triple the size of any other house in the neighborhood. It was made of fancy white stone and it had pillars in the front. They drove nice cars (and had a three-car garage). Most significantly, right there in the middle of our neighborhood, they put up a fence. A fence that kept others out, and kept themselves in.

The message of this house with its chain-link fence sent the rest of us a foreboding message: stay out. We don’t want to be a part of your neighborhood. We want to keep to ourselves and do our own thing. I have no memories of the people who lived there. The only memory I have is the sore spot they left on our neighborhood.

Well, a lot of time has passed since I lived in that little neighborhood. But one thing I’ve been learning lately is how good each of us are at putting up fences in our lives just like my neighbors did around their house. When entire groups of people come together to form some kind of tribe or community, they too can be very good at putting up fences around their group. Fences to keep others out – and lock themselves in.

This is exactly what happens when the Church loses its sense of wonder over the person and work of Jesus Christ. We create barriers that prevent others from coming to Christ. We turn preferences into laws. We make little effort to reach anyone with the gospel who looks, thinks, or acts differently than us. We get comfortable with the status quo – doing things the way we like to do it – even if it makes others uncomfortable. We identify a group of people by their behaviors or their looks, conveniently grouping them into a nice little crowd we simply label “them.”

In other words – we build fences. The fences that the Church builds around itself sends the message to people on the outside that unless you become like us in every way then you are not welcome.

The local church we read about in Corinth (from 1 and 2 Corinthians) is a tragic example of these kinds of behaviors. While the Christians there had been “called to be saints together” (1 Corinthians 1:2), they instead had allowed for massive divisions to form within the church (1 Corinthians 1:10). Many New Testament scholars agree that almost every other issue in 1 Corinthians can be traced back to this issue of division.

The Corinthian church had built many fences. They built fences around their opinions and ideas of what they thought Christianity should look like. They conformed to what made them comfortable and looked down on those who made them uncomfortable.

From the outset of the letter, the Apostle Paul mentions at least four groups that had taken hold in the church (1 Corinthians 1:12). These groups had formed around certain leaders, but the leaders themselves were not the problem. Paul never once speaks poorly of the leaders mentioned here, and throughout the letter he commends one of them (Apollos) for his ministry in Corinth.

The people had grouped themselves first around their opinions and preferences, and then followed the leader who made them feel most comfortable. It is likely that each one of these groups met regularly in separate house churches and rarely came together as one body.

The sad truth is that the Church today can often be even more of a mess than the Corinthian church. Differences over issues of age, ethnicity and culture, gender, and politics cause us to retreat from others and build fences to keep others out. While one of the marks of the Christian life ought to be a growing desire to put the preferences of others above our own (Matthew 20:26-28,1 Corinthians 10:24, 13:5, Philippians 2:1-4, etc.), the fences we build cause us to retreat and think of ourselves or our tribe above others.

The 17thcentury English Puritan John Flavel delivered a wonderful sermon on the first chapter of 1 Corinthians entitled “A sermon on Gospel-Unity.” In it he unpacks just how devastating division and the schism in the Church really is. While he describes several consequences to divisions that take place in the Church, it really comes down to two things. The first has to do with our relationship to Christ. If we really want to know “how to frustrate and grieve the heart of your Lord Jesus,” Flavel said, “you cannot take a readier way to do it than by breaking the bonds of unity among yourselves.” If we truly have union with Christ by faith, then we are necessarily in union with other believers. Breaking one will always have consequences on the other.

Secondly, divisions within the Church are a massive obstacle toward people coming to faith. The snares that evil spiritual forces may employ to prevent others from coming to faith, as well as our natural human nature, are difficulties which are already too great for us to overcome without the Spirit’s help. But if we must also add to these difficulties our “dividing lusts and scandalous breaches, what hope then remains?” Flavel advises us that if we do not have pity on ourselves, at least to have pity on lost souls. Divisions in the church create “such prejudices in the hearts of carnal men, that some of them will never have good thoughts of religion any more: but will utterly distaste and nauseate those assemblies and ordinances from which their conversion might with greatest probability be expected.”

The divided church is easy to ignore. Individuals can be dismissed as fanatics, but a people united across all of their deep differences can only be explained by Jesus Christ.

This is why Paul asks the rhetorical question that he does: Is Christ divided (1 Corinthians 1:13)? No. Christ laid down his life for us and was raised in glory so that his people would find life in him. Would we then still fight and quarrel with his redeemed people because they disagree with our opinions? Can we not see how this destroys everything for which Christ died to purchase?

The Church is a mess, and we’re not much different today from the local church we read about in Corinth. But this is what Christ died for – this beautiful mess of a people. As we keep our gaze on Christ, we will be able to come together across cultural, ethnic, political and generational lines. But this isn’t just going to happen unless we are intentional about it. We must be willing to humble ourselves, lay down our pride, move over, and put Jesus at the center.

When we build a fence around Christ, it will be strong enough to unite us, and open enough for whoever would ask to come in. 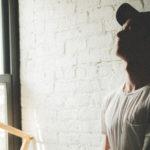 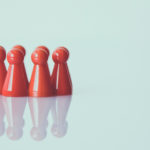 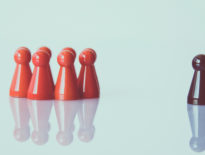 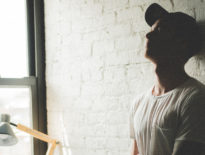